Get all the latest updates about safaris, specials & Letaka Safaris news.

Letaka Safaris is very proud to announce the launch of a six part television series entitled Safari Brothers which will begin screening in the USA on 14 October 2016. 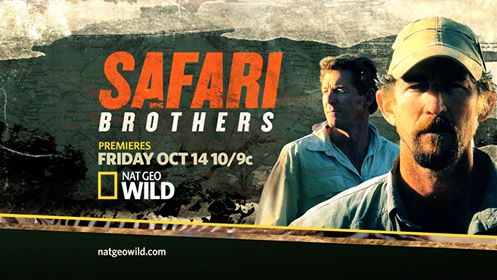 Safari Brothers documents the ups and downs of running a safari company in Botswana’s Okavango Delta. Brothers Brent and Grant along with their father Mike and a large team of Letaka stalwarts take us through the myriad challenges which form the background of running a safari company in Africa. The show was the brainchild of Patrick Greene, owner of Symbio Studios and Emmy award-winning director of the hugely successful Jeff Corwin Ocean Mysteries series. Patrick first met Brent and Grant whilst filming an Ocean Mysteries episode in Botswana and nearly two years later Safari Brothers was born.

The six episodes which make up Season One of the Safari Brothers show were filmed over 3 months at the Letaka Safaris base in Maun as well as many wilderness locations including Moremi Game Reserve, Chobe National Park, Central Kalahari Game Reserve and the Makgadikgadi Pans National Park.

For those of you not in the United States, here is a list of the international air dates for Safari Brothers:

The show not only follows the trials, tribulations and triumphs of Letaka Safaris but also showcases Botswana as a premier travel destination. We hope you enjoy watching the show as much as we enjoyed making it 😎

This website uses cookies to improve your experience while you navigate through the website. Out of these cookies, the cookies that are categorized as necessary are stored on your browser as they are essential for the working of basic functionalities of the website. We also use third-party cookies that help us analyze and understand how you use this website. These cookies will be stored in your browser only with your consent. You also have the option to opt-out of these cookies. But opting out of some of these cookies may have an effect on your browsing experience.
Necessary Always Enabled
Necessary cookies are absolutely essential for the website to function properly. This category only includes cookies that ensures basic functionalities and security features of the website. These cookies do not store any personal information.
Non-necessary
Any cookies that may not be particularly necessary for the website to function and is used specifically to collect user personal data via analytics, ads, other embedded contents are termed as non-necessary cookies. It is mandatory to procure user consent prior to running these cookies on your website.
SAVE & ACCEPT